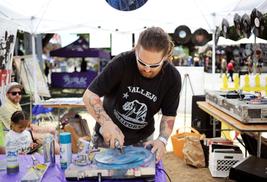 I have lived in many of the most urban cities in the country Flint MI, Detroit MI, Oakland Ca. and work in downtown San Francisco for 10 years. I have seen many cityscapes. Graffiti has always caught my eye as art. I began snapping pictures of everything I saw, capturing some the best urban sites seen. Being in the Detroit rave seen in the late 90’s and the 2000’s I began to DJ. My vinyl art is all based on my music back ground as a DJ. I would stay up late many nights practicing my skills and decided what if you could SEE the music? So as I DJ’d I began to pour paint on the records as it spins the movement of the paint and the colors spinning around really caught my eye. I create my art to duplicate the urban feel. For years I made them and put them on my own walls with friends looking at them bewildered. Now as I journey through the art scene I learn from the many other artists new techniques and coloring to better replicate what I have seen. I continually push myself to achieve a higher standard and to reach out further and further so that others may be able to see the beauty in the STREETS.thndur1 is the premier urban street artist and curator. The mixed media artist is wide ranging from DJing, photography and vinyl spin art. He has been creating and fine tuning his art since 2000. He finally released his art to the world in 2014  and came out with a bang. View his journey and continue to watch as he progresses and grows.CONTACT FOR PURCHASE OR COMISSION WORK. 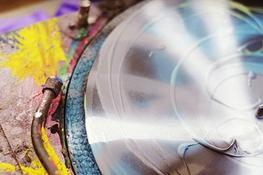 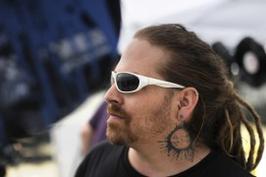 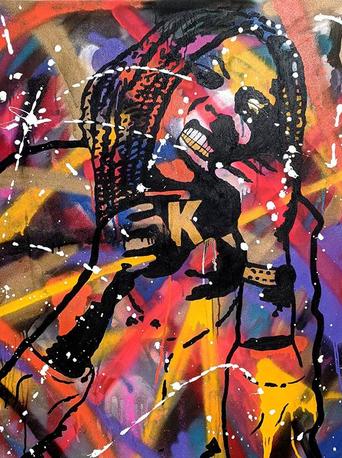 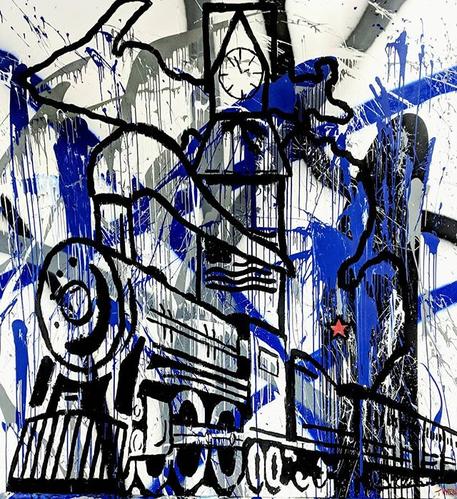 Artist Daniel Churchill exhibits his work, which consist of vinyl records painted while spinning on a turntable, at the Solano County Fair, in Vallejo, on Saturday. (Robinson Kuntz/Daily Republic)

VALLEJO — County fairs always have more than just critters, corn dogs and rides. The Solano County Fair is no different.

For the past two years they have had an artist corner, where local talent can bring their music, paint and sample work for the public.

Dan Churchill – or Thndur1, his artist name – brought some of his mixed-medium work to show and his DJ gear to turn some tunes Saturday.

Churchill, a 10-year resident of Vallejo, recently opened his own gallery, SR29, in Vallejo and was eager to show off his work. He is currently working with vinyl records, spray painting them with a variety of colors.

“If I put them in the window at the gallery and they spin, they don’t warp. But if they sit still, they warp,” he said. Some of his records were sitting in the sun a little too long and had taken on burnt, wobbly edges.

Churchill, originally from Lennon, Michigan, has enjoyed the collaborative and vibrant art scene in Oakland and San Francisco but has found a new home in downtown Vallejo.“California is where everything is more progressive,” he said.

He has seen many changes over the years in the local art world, and said that the pattern of gentrification continues in Vallejo and San Francisco.

“It is cool to see the changes,” he said.“In Vallejo, you can get a place a lot cheaper than in Oakland or San Francisco,” he said.

He also brought a new artist with him, Aaron Mountain, originally from Denver, Colorado.

Mountain is one of the first artists Churchill has put in his new gallery. He didn’t come out Saturday to do his art but to sell it.

“I have had a lot of positive feedback today,” Mountain said.It’s the second time he was at the fairgrounds this month. He said he has been happy with the results.

“Vallejo fits me more than Colorado,” he said.The last day of the fair is Sunday and Churchill will be there creating art. After that it’s back to his day job at Gymboree, but he will be working several more fairs over the next few weeks.